Have A Rabbit’s Foot Fern For Goodluck 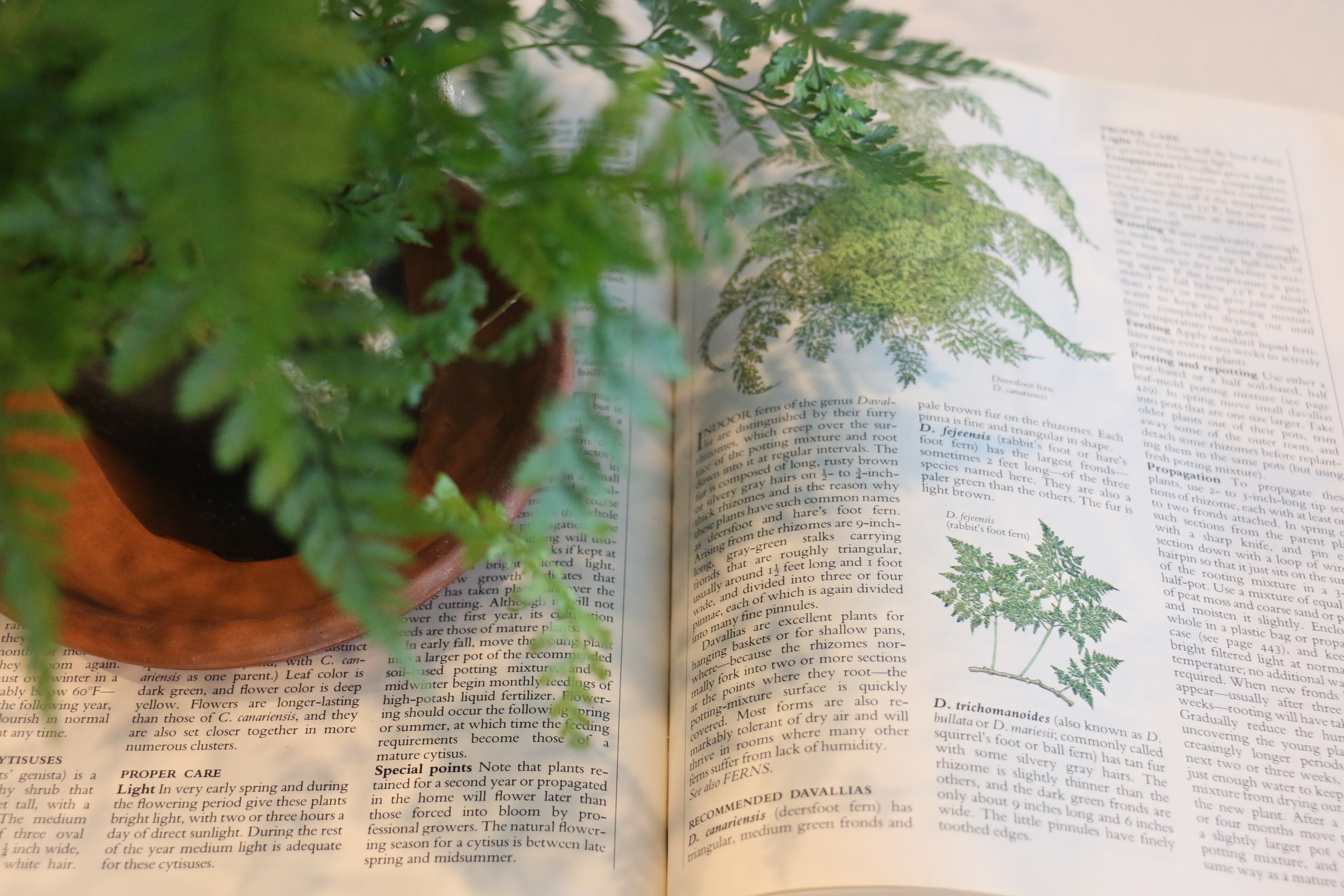 Ferns know me as the Fern killer. Sad, but true. I haven’t given up though. I still keep a few ferns around such as the Staghorn fern, a Boston fern and the Rabbit’s foot fern. Davallia fejeensis (rabbit’s foot fern) is a native of Fiji. It is an epiphytic fern whereby they grow on trees and rock crevices obtaining nutrients from rain, air, trees and debris. This fern gets its common name from its fuzzy-haired covered rhizomes that resemble a rabbit’s foot – a so-called good luck charm. The rhizomes are definitely ‘petable’ and so if you have no pets and not too keen on Goldfishes 🙂 consider the Rabbit foot fern. These furry rhizomes creep on top of rocks, barks on the case if the house plant on soil, where they absorb moisture and nutrients. The plant’s foliage also arise from these rhizomes and witnessing the foliage emerge from them is quite spectacular. This plant has a typical fern appearance of lacy-like fronds which are attached to thin stems. It is easier to take care of than other ferns in my opinion. I probably think this because I’ve had it for months and it is still alive and flourishing. LIGHT: This plant prefers moderate to bright indirect light. It will do well in an east-facing or north-facing window. I keep it on a shelf, a few feet away from a southwest facing window and so far, there have been no scorching of leaves.

WATER: Keep the soil moist and do not let it completely dry out during the growing period. In winter, give the plant just enough water to keep it from drying out completely. I usually water by giving the plant a shower, from top to bottom, there by wetting the fronds and rhizomes as well. Since this is an epiphytic plant, I would think the most important part to focus watering would be the rhizomes rather than the roots HUMIDITY: One thing that makes this an easy-to-care-for fern is the fact that it can tolerate low humidity than most ferns and can therefore thrive in most indoor situations. It is advised to mist the leaves and rhizomes periodically to raise humidity. I do this about once to twice a week. The rhizomes would get wet anyway when watering.

GROWING MEDIUM:  Any potting mix will do. POTTING AND RE-POTTING: It is advised to re-pot when the plant has outgrown its planter or when the rhizomes have filled the top of the planter such that water cannot really get through. I read that when this happens the fronds turn brown and die. This therefore means the roots are just as important as the rhizomes when watering ?! Looking at my plant, it would be quite difficult to repot as it would mean some of the rhizomes hanging on the side of the pot now would end up being buried in the soil when transferred to a bigger pot. And that is a no no as the rhizomes will rot. Dividing the rhizomes during reporting might be the way to go  if you have any tips on re-potting, share them below.

PROPAGATION: Do this in the growing season, during spring and summer, by dividing the rhizomes with roots attached. Place the rhizomes on the surface of the soil and hold it in place by using wire, hair pins, toothpicks etc. Do not bury the rhizomes. Do you have a rabbit foot fern? Share below.