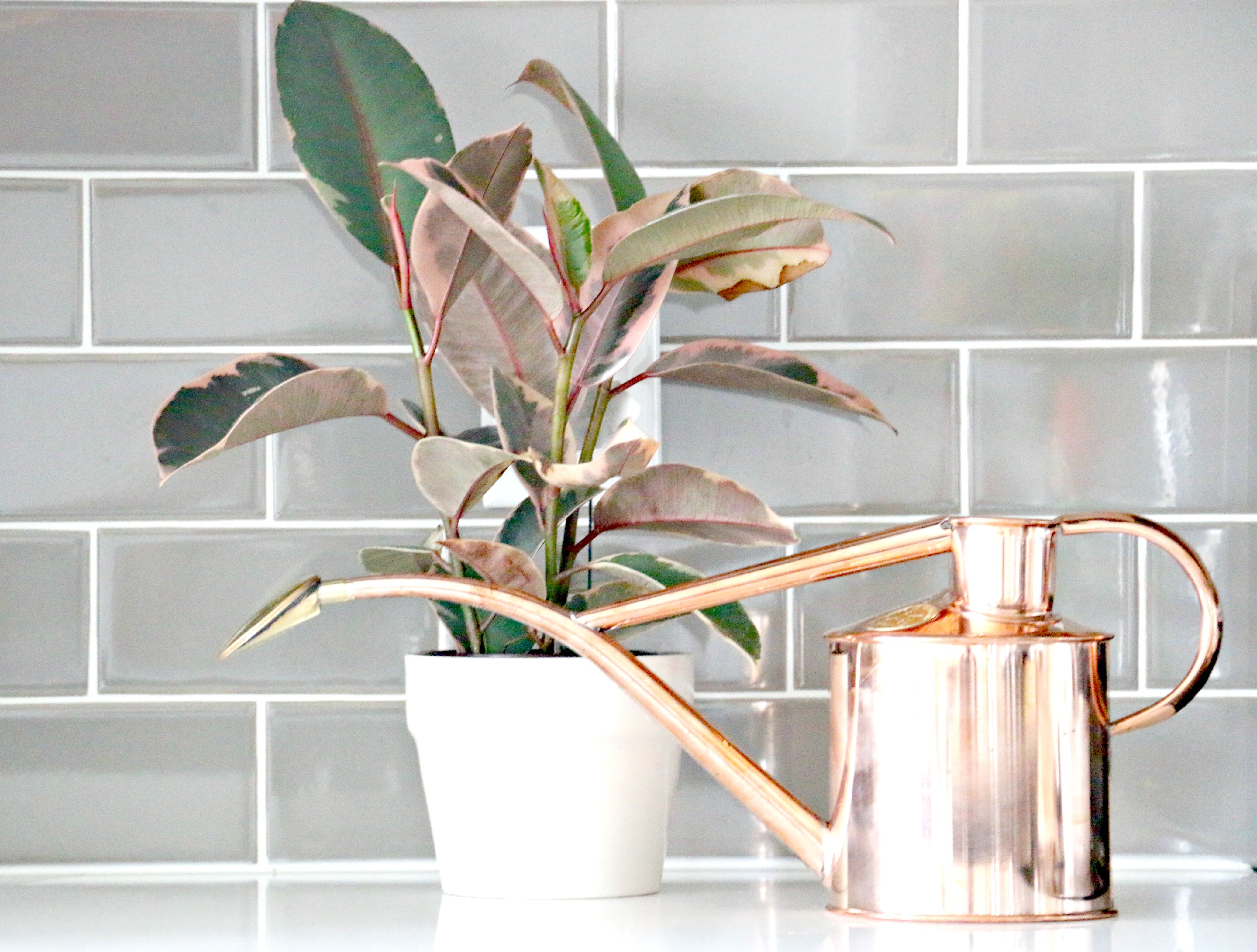 I have come across a lot of rubber plants aka Ficus elastica in garden stores but never really fell in love with them to buy one. I liked how they looked but I was waiting for the “One”. Luckily enough I found it in Ruby, as in Ficus elastica ‘Ruby Red’. The moment I saw it, I had to have it. I haven’t seen this variegated type anywhere else so far in my city. There was only one in the store and I didn’t think twice when I reached out to grab it. It has this pink/salmon variegation that I can’t seem to get enough of. The variegation reminds me of the camouflage army uniform. Ficus elastica aka Indian rubber tree originates from Southeast Asia. It produces a white milky sap (latex) which was once a source of natural, albeit inferior rubber1 hence, its name. It was replaced by Hevea brasiliensis aka Rubber tree as the primary source of rubber in the early 20th century1. Light: The rubber plant will thrive in full sun to partial shade conditions. Those sold in garden stores may not be used to full sun conditions and hence need to be introduced slowly to such light conditions to prevent leaf burn if this is your situation. Bright indirect light is best as a houseplant. The variegated ones like Ruby will need more light to maintain their colour. Insufficient light, will result in leggy growth and leaf drop but this can be rectified by moving into a more well-lit area.

Water: I water my plant  about once a week. This plant likes the soil to be relatively moist but does not like to sit in water. Water less in winter with less plant activity. Yellow leaves are a result of excessive watering. If this happens, stop watering and allow to dry out before watering again. Keep it in a pot with drainage holes. Mine is in a drainage pot, which sits in a decorative planter. This allows me to remove it and water it without worrying about it being waterlogged. Humidity: This plant will be fine with humidity levels in most homes. Some sources advise to mist the leaves occasionally although I would advise against this as this can cause fungal leaf spots to form. Not very appealing. When this happens, remove affect leaves and stop misting.

Pests: So far, Ruby has not yet been attacked, however F. elastica is susceptible to  common pests including mealy bugs, spider mites and scale.

Propagating: I don’t know anyone who would go through  the pains of propagating one as the plain ones are so common to buy. But perhaps if you have a rare variegated variety you may want to try. Or also perhaps for the experience of starting from ‘scratch’. Because they are slow-medium growers it may take quite a while to grow a mature plant, I would think. Apparently though, they are easy to propagate with a stem tip cutting and some bottom heating. If anyone has tried this, please share your experience below.

The rubber plant grows tall and so will need repotting as it grows. Or you can prune it and keep it small in the same pot. I usually inspect my plants closely and one thing I noted were these small white dots close to the leaf margins. You can see it in the picture above. If you have seen them I imagine you probably thought they were pests and tried to see if they would rub off. Don’t worry, they are not bugs. After in-depth research I discovered these spots are large cells called lithocysts2. These cells are also known as “rock cells” and house deposits of calcium carbonate3. In the animal world, this biomineralization of tissues is equivalent to bones, teeth and shells3. In other plants, this mineralization results in thorns and needles3. For the rubber plant though its purpose is unclear. The rubber plant has big beautiful glossy leaves which means it has the tendency to collect dust. It is therefore advised to clean them once in a while. All you need is a soft sponge or cloth and some tepid water to wipe them down. Ruby, is quite young and has a long way to go in becoming a big tree and I am curious to see how it will change over the years. Do you have a rubber plant? Big or small? Share your experiences below.